The command line is scary! It’s all, like, black and white, and you can’t use the mouse, and, and, why would anyone want to subject themselves to such madness? Here are 5 good reasons:

So how do you access the command line? There are a bunch of ways, but until we get into the really advanced stuff, we’re going to stick with the easiest and most popular method: The Terminal.

A lot of people use the word “terminal” to refer to the command line, but the Terminal is a utility. A Utility you use to access the command line. Think about, um, okay, think about baseball. Usually you’d play baseball on a baseball diamond in the park, but you wouldn’t say the diamond is baseball. The diamond is just the most popular place to do it. You could play baseball in a parking lot, or the middle of the street, or the beach, or even on a video game. The command line is the same way. You could access the command line from the login screen, or from a remote SSH session, or from single-user mode, but the most popular method by far is the Terminal app.

So open your Utilities folder, and launch the Terminal app. Now you’ll probably see something like this: 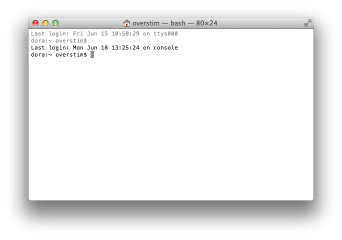 That’s your command line. We will talk all about the ins and outs and details in a later post, but this is getting long, so let me finish by having you type your very first command! Don’t be nervous, now, just put your hands on the keys and type:

Press return, and see what it does. Figure it out? It’s just a simple command to show you how long your Mac has been up and running without a restart. Easy! next time we will explore some more complex commands, promise. TTFN!

2 thoughts on “Terminal basics – lesson one”