An iPad for a two year old??

When I tell people my 2-year old has an iPad, I get a range of responses, but they are seldom positive. They range from “Wow, I’m jealous!” To “Why the hell did you get your baby an iPad? SPOILED!” I’d like a chance to convince you that this isn’t a crazy idea at all.

Its a learning toy 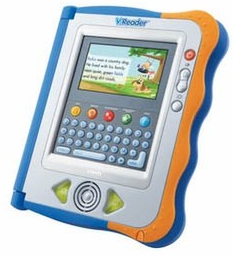 This is a V-tech V-reader toy. I hear it’s pretty popular. Its $60, plus cartridges are $20 each. You could easily go over $100 or even $200 just with this one product. And there are countless others like it- Speak-n-Spells, e-readers, and faux laptops for kids to learn with. The Leapfrog Leapster is even more popular, according to Amazon and Toys R Us, and it’s $120 for a unit and a couple games.

The iPad has TENS OF THOUSANDS of learning apps and games, and they’re all about $2-$5. Many are free. And it’s not going to get outgrown, or obsolete, just download newer games as they get older.

Its a movie player. 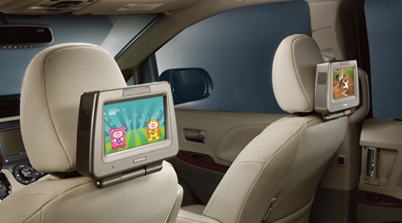 My wife’s family is in PA, we live in MA. So there are a lot of 5-hour car rides. Anyone with a small child knows what they’re like strapped in a carseat for 5 hours. DVD entertainment systems in cars and minivans are becoming popular, for good reason. But an overhead DVD system for a Dodge Grand Caravan costs $1395. For a Toyota Sienna, it’s $2495. That gives you two screens with DVD players, and 2 pairs of wireless headphones. Only have 1 kid? Too bad, you’re paying for 2. (Why are you getting a minivan anyway?) 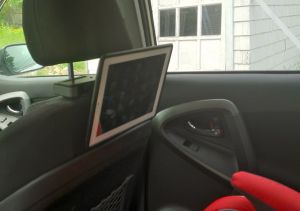 This is Josh’s iPad 2. It’s a 16GB wifi-only model. It retails for $399. With the flood of people returning iPad 2’s to get iPad 3’s this sprain, we easily found one open box at Best Buy for $359. We could have saved another $10 if we bought it from Apple’s online store, but then we’d have to pay tax. Oh, and we had Amex points, so we only paid about $90 out of pocket.

The car mount we went with was from BestBuy as well– a Rocketfish, which is BB’s in-house brand for accessories. It’s actually a car mount AND a case. We leave the case on all the time and it easily pops in and out of the mount. It’s a nice, thick, heavy-duty rubber, too ugly and bulky for me to carry around and take to work, but for Josh its perfect. It cost $50 open box.

For now, Josh listens to his movies, and we listen to the radio, and it’s a little noisy, yeah, but he’s too young yet to be comfortable with headphones. Some day we may want to cut out the noise, and some day Josh will have a little brother who will want to watch movies of his own. We can get headphones then, for about $20 each.

That’s 2 iPads, car mounts AND headphones for $840. Versus $2500, for something that only plays DVDs? Yeah, that’s a no-brainer. The iPad plays video files. That means you don’t have to bring DVDs with you in the car and lose them, and the kids won’t fight over who gets which one, just put the same movies on both, and swap them with new ones any time you like.

Oh yeah, its a computer, too.

This one, you already know. ON TOP of being a better video player and a better learning tool, it’s also an iPad! So you can take it to the supermarket and help you compare prices and discover coupons, read a book once the little one has gone to sleep, play games, check your banking, send email, surf the web, update Facebook, and it’s even a digital photo frame.

Can he use it?

That’s the other question we get. People seem incredulous that a not-qute-two-year-old would know how to use an iPad. Well, see for yourself: